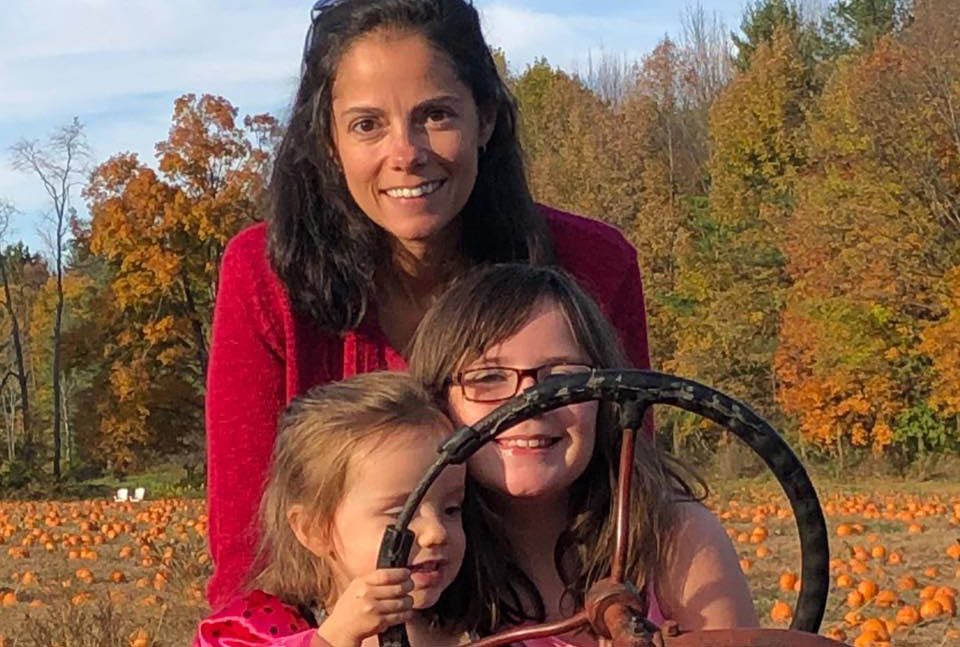 “Sometimes ideas pop into my head fully formed,” Jen Rondinone says. “That image will be there and I just have to bring it to life. The creation of it can be a very long process but the actual concept is very quick.”

Her work is large, emotionally loaded, and contains a lot of hidden messages. She uses “whatever medium the piece requires,” which can be anything from oil paint and stained glass, paper mache, stained glass, and beyond. There is a decoupage and oil paint on canvas piece using the pages from a book that she shrunk and dyed.

“I told my mom when I was four years old that I was going to grow up to be an artist,” Jen said over coffee recently. “That’s all I ever wanted to do.”

But for a long time that stone went unturned, repressed by a bad marriage.

“I hardly did anything for the 13 years I was with my ex-husband,” she said. “I think I produced two pieces the entire time. It was one of the first things I reclaimed after he left, my art work.”

The 44 year-old mother of four moved to Rutland about two years ago and the first piece she did was called “My Electronic Leash” – a tall, artfully arranged phone bill documenting a staggering number of text messages sent to her one afternoon.

“There was a lot of anger in that piece,” she said. “The papers are all scrunched up to mimic the anger and frustration I was trying to get across.”

And so art became the perfect outlet for her.

“It’s amazing I can express a thought or an idea almost instantly in an image that would take ten thousand words to try to express,” she said. “When I was creating that piece there’s no way I could have painted that detail to really express what I was trying to, so it had to be the actual phone bill on there.”

The piece she’s currently working on is four feet by five feet with a lot of detail to it, a powerful image that looks like stepping out of a jail cell into freedom. Another one she calls ‘The Monster Not Under the Bed’ shows an arresting image from a child’s point of view under a bed, looking at a man standing in the room, only visible by his threatening boots.

Another one she called “SOS” because that’s what it says in morse code but she purposely left it untitled, saying, “I didn’t want to lead the viewer in one way or another, and that was kind of my hidden message. If you see it you see it or if you don’t that’s ok, I want to know what this says to you. And after talking to people the feeling got across regardless of whether they knew or not.”

“It’s not everybody’s cup of tea and some people may not understand it but I’ve gotten such a wonderful reception,” she said.

She’s only recently got back into painting about a year and a half ago, and soon after applied to become a Chaffee juried artist member.

“I love going to the openings and talking to fellow artists,” she said. “It’s so fascinating to talk to other artists and see what their creative process is, how they work, and how they think because we’re all so different and it’s all so personal. It’s a wonderful community.”

“It helped me heal,” she said of her artwork. “And I’ve got sketches and ideas to keep me going for years.”