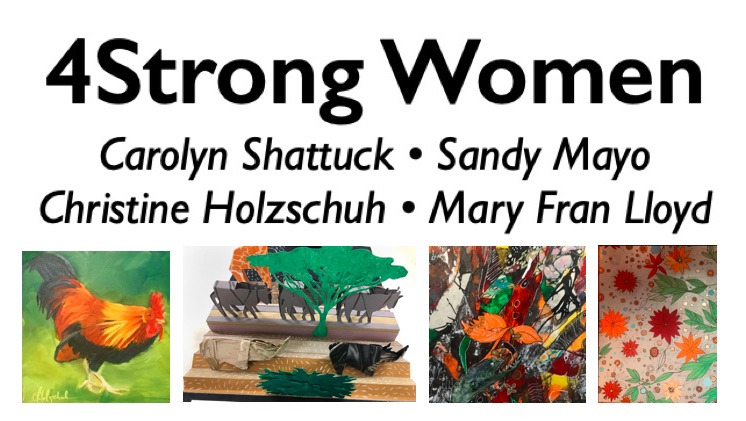 “I hope I played a role in helping my daughter become an artist. When she was six years old, she had a space in my studio and I hung her work. Her interest in making art was always validated,” Carolyn Shattuck recalls.

She describes herself as a feminist mom who encouraged her daughter to make art from the ideas she had rather than aiming to create “pretty art”.

Shattuck is one of the featured artists in the Chaffee Art Center’s new exhibit “4Strong Women”. Her exhibit “Impermanence” focuses on her study of Buddhism.

“My main focus is to align my beliefs with the acceptance of life and death.

In the works on paper, I have incorporated Puritan symbols such as hourglasses and urns in a still life setting,” Shattuck says.

She also says attending Bard College for her MFA created a unique viewpoint.

“(It) taught me to act on my ideas without any restraints of gender bias.

It was a mantra to speak your mind or you were not being honest,” Shattuck shares.

“I would say to young women to keep putting one foot ahead of the other and not be deterred.”

“Most often, when I was told that I could not achieve a certain goal, I would be more inspired to prove that I could,” Mary Fran Lloyd says.

Her exhibit “UNFOLDING THOUGHTS” is about the aging process and the joy that can be found in our memories. The Folding Line is a series using line drawing and color to express the realization of getting older.

“I tried to create the activity and excitement needed to express such profound memories that are more often realized as we age at a time when all of life comes together. When we allow ourselves to talk about how our life experience has made us into who we are today,” Lloyd explains.

She chose this for the exhibit at the Chaffee because art has always encouraged her to be bold and headstrong to get where she wanted in life.

“I realized in my younger years if I want to get to a special place in life, I have to work for it and that I have to be bold and unafraid. Art has allowed me to express what is in my heart and soul, the highs and the lows, the good and the bad, and has given me the strength to always go forward in a positive manner,” Lloyd says.

She would tell young girls and women pursuing a career in the arts to follow their hearts.

“Be bold and unafraid,” Lloyd encourages.

“Just do it! The only way you gain expertise is to practice your craft daily,” Holzschuh says.

Holzschuh was diagnosed with a terminal brain tumor this past January. She says she used her collection “Respite” as a break from the manageable treatment she is undergoing.

“Giving yourself the freedom to rest and recuperate can be an ultimate gift. Respite was the word that came to mind when I started to think about what I wanted to say,” she says.

The final featured artist, Sandy Mayo, chose to include an interactive series in the first exhibit of the summer. Her contribution “Back to the Garden” consists of $50 prints and black and white prints that are left unfinished, encouraging guests to fill in their own colors.

“The Chaffee is trying to fill its gallery again and reopen to previous capacity, they’re asking people to come and be connected and I wanted to add to that,” Mayo shares.

Mayo wants guests to take some time out to remember the simple beauty life offers.

“It’s just a little timeout, you can find a little joy and a little creativity here,” Mayo concludes.