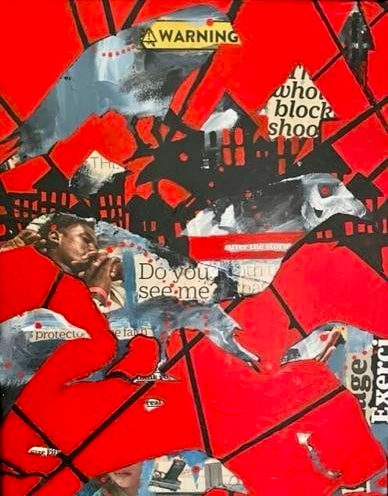 Rather than featured artists and an overall theme, the Chaffee Art Center’s latest exhibit features themed galleries, which Executive Director Sherri Birkheimer Rooker says lets each of its members share the spotlight.

“It helps to put the focus on (all of) our artist members,” she said recently. “We value them.”

In the gallery titled “Frozen” hangs photographer Lowell Snowdon Klock’s depiction of a bench in an alcove of trees, every inch drenched in snow, to a dramatic effect.

The gallery called “Breathe Deep” is punctuated with a large, striking painting of a hawk by Christine Townsend in acrylic; and the gallery titled “Resolutions” opens with a triangle of artist Mary Fran Lloyd’s paintings called “No More Sorrow,” “No More Grief” and “No More Sadness” in acrylic and pen.

Familiar members are mixed in with newer members like Susan Wacker-Donle, Denise Letendre and Michelle Hartline, who talked about their work recently.

“‘Requiem’ came out of an interesting and unusual process for me as so much of my art is often based on a visual reference … a photo I’ve taken, a landscape in front of me, lemons on the countertop,” Hartline said by email about her piece “Requiem for Charlottesville,” a mixed media-collage and acrylic on 140-pound watercolor paper.

“This was a visceral and subconscious expression that evolved out of a totally different collage I was working on (I think if you X-rayed it, you’d find a portrait of Leonard Cohen under there),” she stated. “The piece proves to me how we are all affected, even if remotely, by trauma. In no way have I experienced anything like the horror of Charlottesville and yet I wonder if someone who was there could identify with the piece on some level.”

“I often think I’m painting to reflect my feelings about something that I’ve observed but, obviously, I’m painting for other reasons that even I — the painter — am not aware of,” she added.

Hartline, who lives in Sudbury, is largely self-taught and said, “Art was always an avocation rather than a vocation, and I’d say my ‘medium’ has more often been my gardens than a piece of paper.”

Photographer Denise Letendre’s “Eat” shows a business-front that, in black and white, gives the feel of a retro diner. It sits beside another storefront door she photographed called, “Sorry, We’re Dead” where a “Sorry We’re Closed” sign might be.

“Basically, my process starts with traveling around the backroads and towns of Vermont with my camera,” Letendre said by email. “I live in Castleton, so I’m usually looking within Rutland County or just over the border in New York. I park my car, poke around, and take pictures of anything that catches my eye.”

Photographer Susan Wacker-Donle, of Pittsfield, shares a similar process and says her work also is a product of her environment.

“I just love the area here; (it) inspires me all the time,” she said by phone. The heaping snowstorms during winter become part of her process.

“The next snowstorm we have, I will pick a spot that I haven’t been to and see if there’s anything there that catches my eye, and I will take photographs,” she said. “I usually take about 100 just to get the one that just might be great.”

“The interesting thing is, a lot of my photography I have planned, but what usually happens is that photo never really comes out. It’s always another scene that I had no idea was even going to be there,” Wacker-Donle said. “It seems like the more that I plan it, the less the photographs come out, and the more that I see something unexpected, that’ll be the photograph. A lot of serendipity is involved.”

For her piece called “Ice storm,” she said, “Everything about that shot is probably against the rules.”

“I’m shooting right into the sun, and you’re not supposed to, but it gave me this incredible effect of the sun coming through the ice and the trees and the snow. So you have to keep an open mind,” she said.

Too much manipulation is an easy temptation with digital photography, but Letendre and Wacker-Donle agreed, less is more.

“I don’t do a lot of retouching because I find the more you manipulate a photograph the further it gets from something that’s attractive,” Wacker-Donle said. “When I turn it into black and white it becomes even more of a piece of art, and it’s taken away a little bit more from reality.”

“I like to make my images in sepia rather than full color because it makes the scene seem removed from the present, from the flow of time, as if it’s a moment that’s been preserved,” Letendre said.

The exhibit runs through March 3.

Birkheimer Rooker said, “The new exhibit has three themed galleries and then we have art throughout the rest of the mansion. I try to highlight our artists members so I thought this would be great for them, because they’re (all) front and center.”

Author: Chaffee
Filed Under: Chaffee in the news
Check Out this Month’s edition of PegTV’s “It’s All About the Arts”